When we got married we used photo frames for our table names. Alongside this, I seem to have collected a ridiculous number of the things over the years so I decided last week to create a feature gallery wall to spruce up my hallway.

A gallery wall not only creates a great focal point, it also gives you an excuse to frame all of those photos you love but that aren’t quite professional or staged enough to warrant a place on the mantelpiece alone. It’s a doddle to do and all you need is a handful of nails and a hammer (don’t even mention it to the Mister – queue “I’ll go and get the drill”). Alongside your frames it’s a good idea to include some other decorative pieces to add a little more interest and break up the images – I had some large typography pieces around the house which I incorporated.

There are also some great online resources and blogs that offer free printable downloads such as littlegoldpixel.com, which are great if you don’t want every picture in your gallery to be a photograph.

I started by laying out all of the frames on the floor in front of the hall wall to get an idea of how wide and tall I wanted the gallery to be. I admit that I felt like my mother a little bit here, obsessing over which pieces looked best where, but it’s worth spending some time until you get a layout that you’re happy with. I then took a photo of the layout so that I could replicate it on the wall. Starting by nailing the highest frame onto the wall, I then worked my way out until I got the finished gallery. Definitely an easy and cost-effective way to make a great feature in your home! 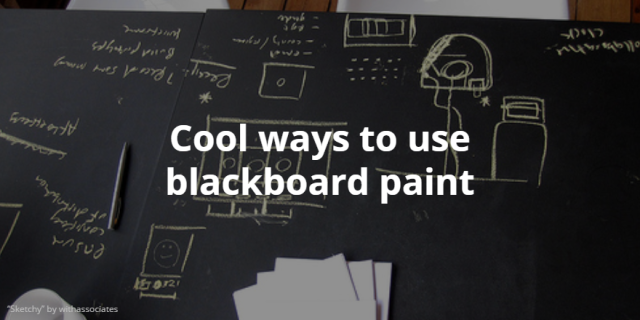 If you haven’t yet used blackboard paint in your house, I would seriously recommend it. Not only does it provide a great canvas for To Do’s and shopping lists, it also adds interest and personality, and replaces the need to fill wall space with something less useful and more expensive.  Not to mention the amusement it can bring the morning after the night before when you realise that someone got hold of the chalk…

When I completed my DIY Kitchen makeover, I finished it off with this little design and have been loving it so much that I wanted to spread the blackboard paint love.

I bought mine from Wilkos which is by far the cheapest I could find (the likes of B&Q charge over £10). You can paint a whole wall with the stuff, or just mark out a space like I did using masking or frog tape. I then used a chalkboard pen and inspiration from Pinterest to add the border and the mixed typography – I’ve found in the past that the chalkboard pens aren’t actually as easy to wipe off as they claim, which is a good thing in a way as it means you can use it for a permanent design and then just use ordinary chalk for the everyday additions.

There are loads of ways you can get creative with blackboard paint – here are some of my favourite ideas which I found online:

I live in the West Midlands with my hubby, baby girl and cocker spaniel. When not on maternity leave I have a day job in PR. This is my blog!